B 08 - Role of the synaptic cell adhesion molecule Neuroplastin in the immune system: relevance for signaling and Ca2+ homeostasis during T cell development and activation

This strategy led us to initiate studies on the putative roles of the synaptic scaffold proteins ProSAP1 (Shank2) and ProSAP2 (Shank3) and on the cell adhesion molecule neuroplastin. While loss of ProSAP proteins in the nervous system causes autism, our phenotypical analyses in the immune system of corresponding mouse mutants point to a role of these proteins in the development of discrete T cell populations. The underlying cellular and molecular mechanisms will be further investigated in close collaboration with the group of Klaus-Dieter Fischer (OvGU Magdeburg). The elusive role of neuroplastins, which are abundantly expressed in immune cells, will as well be assessed.

Using the CRC 854 as a platform we will also subject ProSAP-, neuroplastin and further selected mutants to systematic immune phenotyping, e.g. in models for infection and inflammation. 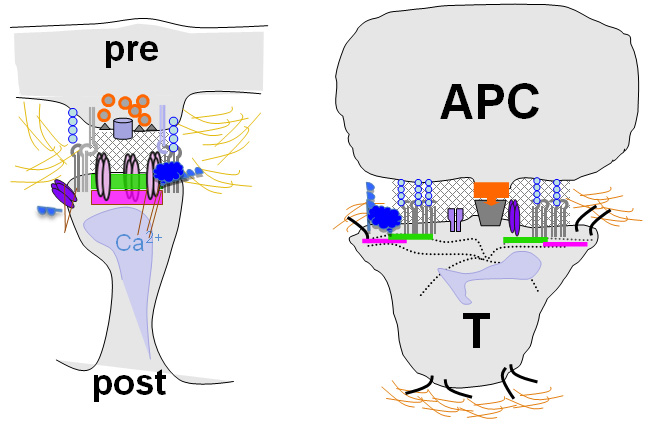 Neuronal (left) and immunological synapses, though clearly different, share a number of principal properties such as asymmetry, selective adhesion, receptor clustering and a sophisticated regulation of intercellular communication via Ca2+-signaling. A number of neuronal synaptic proteins including Dlg-like MAGUKs (pink) and ProSAP/Shank (green)-scaffold molecules are also localized to immunological synapses, yet their roles therein are mostly unknown.